The Weekend Spin: #1 - We Built This City on Little Lion Men

It's been an odd but all too quick weekend, again. Any plans to listen to a record Friday night went out the window due to an impromptu Cinco de Mayo celebration, involving a pitcher of Margaritas. How I didn't wake up hungover Saturday morning, I have no clue. But, leaving behind the mixed sounds of Mexico Friday night, I proceeded into a dull Saturday morning of slightly chilly temperatures outside, and hours of cooking shows inside well I competed household tasks. This translated into a Saturday evening that seemed to arrive prematurely, and long lingering debates over dinner, and how to spend the evening. To say the least it was darn near 10 before the evening settled into the double feature of The Phantom of the Opera and the 1984 version of Dune.


The first chance to honestly sit and listen to a record was unceremoniously late Sunday afternoon. Time I carved out of what felt like a was a loophole in family time.


This is Mumford & Sons, freshman entry and what would start the bands whirlwind success. Having received Babel a few years back, followed by Milder Mind I always wanted to take a step back to their first album since as a long time fan I had encountered various entries from it and wanted to hear the complete album. 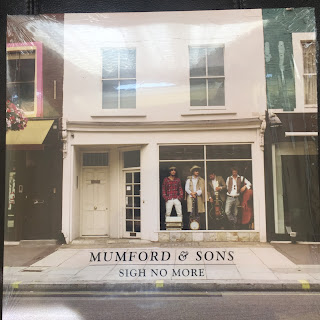 I have to say after waiting nearly 4 years since receiving Babel, I definitely wasn’t disappointed in the bands first album. It's easy to see how Sign No More flowed seamlessly into Babel, and then Babel into Milder Mind since the band has a sound it stays true to without getting too experimental as many bands are inclined to do. According to some sources the albums genre is Country, but I can tell you it lies more between modern minstrel folk and alternative.


Although I can honestly say I liked every track on the album, my favorite is Little Lion Man, even if it's the one with a lot of airplay. The song has that right amount of Mumford & Sons sound, while also being a little edgy. The album as a whole though is only 12 tracks, and last around 48 minutes in its entirety meaning it's also somewhat short, but sweet.


Although only drinking a Coke Zero at the time of listening, the album could go well with a craft beer, like a Scotch Ale, or an Amber Bach since the album has a trendy yet unrefined feel like those beers. I could easily see myself listening to Sigh No More, well meeting friends at a River North bar some Friday evening and enjoying a Fat Tire as well..


Apparently giving myself permission to buy an album is too much for me. My initial buy was a Starship 45’ with We Built This City on the A-side. I had a flirtation with the song the weekend before after a flood of memories came over me regarding a family tradition in the 80’s of 4 o’clock mass followed by a trip for pizza at our favorite place. The original version of the restaurant had a loud jukebox, plenty of cigarette smoke, and some great pizza. Somehow between 1985 and 1992 We Built This City played at least once when we were in there. Looking to eventually get a jukebox of my own I decided long ago that this 45’ had to be on there.


Making a decision on a whole album though wasn't so easy. My choices came between John Mayer, Blake Shelton, Train, Bruno Mars, Norah Jones, Arcade Fire, Florence and the Machine, and Of Monsters and Men. As you can see mostly albums from more modern artists. Narrowing it down came between Mars Doo Wops & Hooligans, Sheltons If I'm Honest, and Mayers Continuum, with Trains A Girl, A Bottle, and A Boat pushing in from the outside since I just got tickets to thier concert in June. Eventually, I settled on Bruno Mars Doo Wops & Hooligans, since I’ve had the album on my wish list for a while and figured it had priority.


For The Next Time:


Next weekend may be a bit busy so time to chill in front of the record player may not happen. If it does though hopefully my new Starship, and Bruno Mars records are part of it. Until then have great week, or great next couple weeks

Posted by TheGrandEmperor at 9:01 PM

See the bottom for more